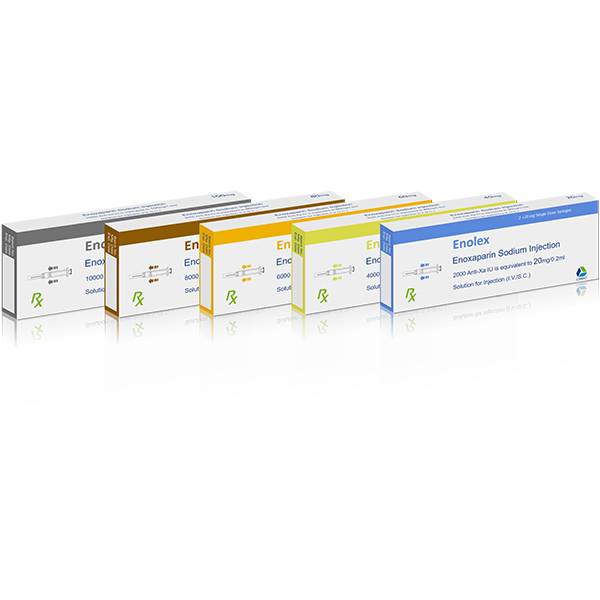 INDICATIONS:
The prophylaxis of thromboembolic disorders of venous origin, in particular those which may be associated with orthopaedic or general surgery.
The prophylaxis of venous thromboembolism in medical patients bedridden due to acute illness.
The treatment of venous thromboembolic disease presenting with deep vein thrombosis, pulmonary embolism or both.
The treatment of unstable angina and non-Q-wave myocardial infarction, administered concurrently with aspirin.
Treatment of acute ST-segment Elevation Myocardial Infarction (STEMI) including patients to be managed medically or with subsequent Percutaneous Coronary Intervention (PCI) in conjunction with thrombolytic drugs (fibrin or non-fibrin specific).
The prevention of thrombus formation in the extracorporeal circulation during haemodialysis.

OVERDOSAGE
Orally administered enoxaparin is poorly absorbed and even large oral doses should not lead to any serious consequences. This may be checked by plasma assays of anti-Xa and anti-IIa activities.Accidental overdose following parenteral administration may produce haemorrhagic complications. The anticoagulant effects can be largely neutralised by the slow intravenous injection of Protamine, but even with high doses of Protamine, the anti-Xa activity of enoxaparin sodium is never completely neutralised (maximum about 60%). The initial dose of Protamine depends on the dose of enoxaparin given and also consideration of the maximum recommended Protamine dose (50mg). Data on Protamine dosing in humans for enoxaparin overdose is extremely limited. The available data suggest that in the first 8 hours after enoxaparin administration 1mg Protamine should neutralise the effects of 1mg of enoxaparin. Where the dose of enoxaparin has exceeded 50mg, an initial dose of 50mg Protamine would be appropriate, based on the maximum recommended single protamine dose. Decisions regarding the necessity and dose of subsequent Protamine injections should be based on clinical response rather than measurement of anti Xa or anti XIIa results. The physician should also consider that the amount of enoxaparin in the body drops to 50% after 8 hours and 33% or less after 12 hours. The dose of Protamine should be adjusted depending on the length of time since enoxaparin was administered.

STORAGE CONDITION:
Store at 20-25℃, excursions permitted to 15-30℃. Do not freeze pre-filled syringes.

Enoxaparin sodium is characterised by a higher ratio of antithrombotic activity to anticoagulant activity than unfractionated heparin. At recommended doses, it does not significantly influence platelet aggregation, binding of fibrinogen to platelets or global blood clotting tests such as APTT and prothrombin time.

Enoxaparin binds to anti-thrombin III leading to inhibition of coagulation factors IIa and Xa.
Enoxaparin has been shown to increase the blood concentration of Tissue Factor Pathway inhibitor in healthy volunteers.

ADVANTAGE:
Strongest anticoagulant activity and Fastest effect. It has a long elimination half-life and the highest potency. It is the most widely used and has the most indications LMWH in the world.

Write your message here and send it to us